Request a Tour
My Oakridge
News Spotlight
--- There are no items at this time. ---

Oakridge Fine Arts students prepare to bite into "James and the Giant Peach" and into the Big Apple, too

There is quite a bit of buzz surrounding The Oakridge School's Fine Arts Department. Upper School students are diligently preparing for the 2020 spring musical, "James and the Giant Peach." Â They're also eagerly anticipating their visit to the Big Apple, where they will grace the stage at Carnegie Hall, one of the most famous concert halls in the world.

"James and the Giant Peach" is one of Roald Dahl's most heartwarmingly quirky stories. It tells the tale of James, a boy orphaned and living with mean-spirited aunts. He finds himself on a fantastical journey with magically grown insects inside a larger-than-life peach. As they make their way from England to New York's Empire State Building, James and the band of misfit bugs tackle each misfortune and embrace each success, ultimately becoming a family.

The adventurous musical features a wickedly tuneful score from the creative team of "The Greatest Showman" and "Dear Evan Hansen."

Performances are Feb. 20-22 in the Fine Arts Performance Hall and will offer something special this year: a meet and greet with the cast and crew after the final show. When purchasing tickets at www.theoakridgeschool.org/page.cfm?p=11734, patrons should choose "Child Ticket with Meet and Greet" for the Saturday matinee, then stay following the show. There will be snacks and an art activity at no additional cost.

"It's really going to be memorable," said Upper School Drama Teacher Brad DeBorde. "In addition to the Meet and Greet, our student performers are getting an opportunity to learn from Oakridge alumna Lauren Wheat '13. "Lauren graduated from Baylor University in 2017 and works professionally in the Dallas-Fort Worth area as a scenic designer and painter. We hired her to be the scenic designer for this production and our students have really enjoyed working with and learning from her." (Wheat was featured on pg. 27 of the summer 2019 Outlook magazine).

Just a few short weeks after "James and the Giant Peach" wraps, Upper School choir students will take a magical trip to New York City.Â  They'll get to do some sightseeing, but one of the most incredible opportunities the Oakridge students will get is the chance to perform at Carnegie Hall.

"I don't think any of the students fully understand the magnitude of the opportunity, until they step onto the stage at Carnegie Hall, and they see this iconic, world-renowned concert space," said Director of Choirs Andrew Stewart. "It just kind of floors you at first."

Oakridge works with a company that arranges visits for many different groups throughout the year.

"They bring in five to six high school choirs and we sing with them all," Stewart added. "So, there's this large collective choir, which is kind of fun to be a part of to start with, then you're getting to be in Carnegie Hall, which is pretty spectacular." Stewart said though there is a lot of time spent rehearsing during the trip, there is time to be a tourist.

"We see some Broadway shows and it's just astounding," he added. "It's five days away with your friends and a big chance for the students to bond and gather their collective identity among each other. They're getting to do something important, together, in a really cool place."

Though Stewart has been leading Oakridge students on a trip to New York for many years, the experience never grows old.

"It's just first class all the way around, and it's historic," Stewart reflected. "They hold the choirs in these green rooms that are about six or seven floors up from where the concert hall stage is. Even as you're walking down the stage, you feel the gravity of the situation-- that you're performing on a stage where the Beatles performed, and Luciano Pavarotti performed, and where all of these incredible icons throughout history have performed. So, it's pretty special.

From a personal standpoint - I love seeing the excitement on the faces of the kids from the first time we step off the bus in Times Square to the first time they see Carnegie Hall â and just knowing that they're having an incredible time singing, something that we all love." 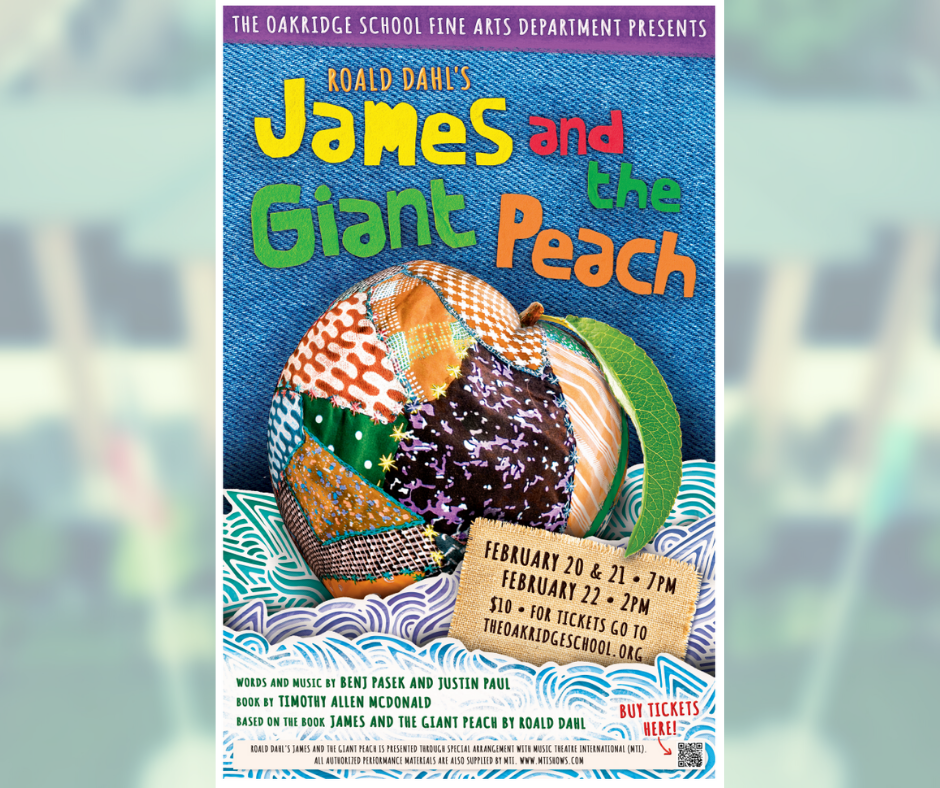 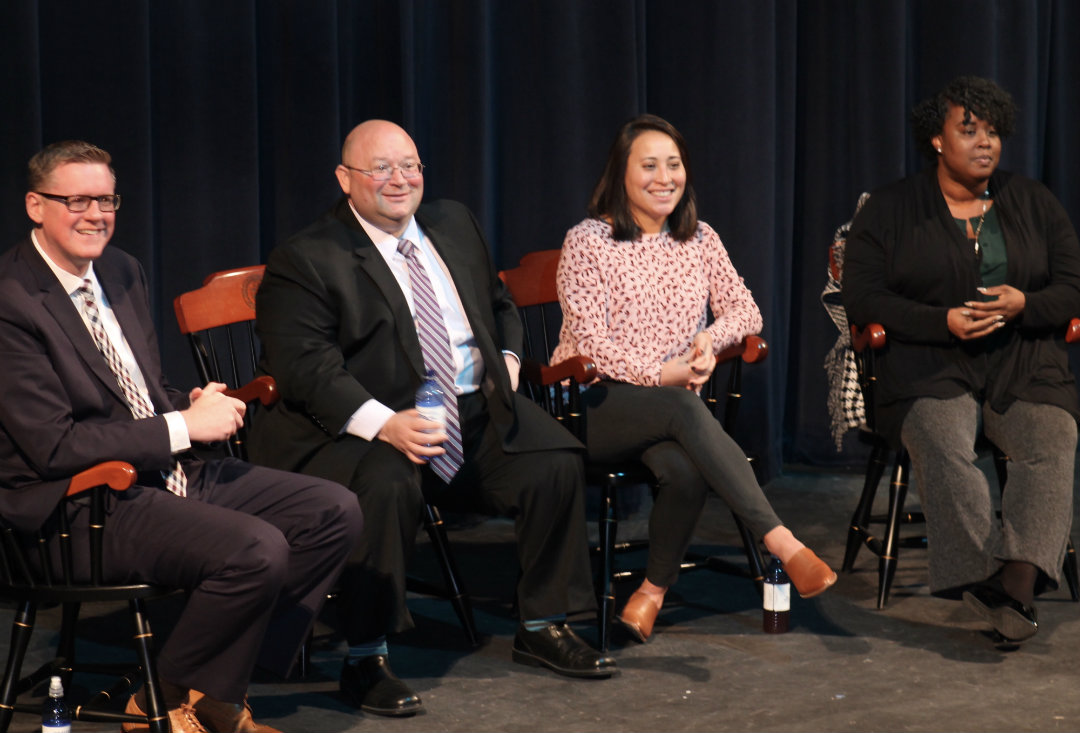 Oakridge students and their parents heard from admissions leaders with the University of Oklahoma, Spelman College, Trinity College, and Tulane University at the 2020 College Night:Deans' Panel held Jan. 30 in the Fine Arts Performance Hall.

Director of College Advising, Mrs. Kellen Lewis, moderated the evening, which was sponsored by her office and the Oakridge Parents' Club. The discussion ranged from how students can make themselves stand out from other applicants during the admissions process to considerations that should be made when a student and his/her family are seeking to find the right fit.

"Consider the application as your personal narrative," said Tiffany Nelson of Spelman College in Atlanta, GA. "It is your (the students) story to tell. We look for all the reasons to admit the student, so spend time telling us who you are. If there are concerns that occurred during your academic career, tell us. Tell us why you decided to stop certain activities. It is your application and your story to share."

On finding the right fit, students were urged to do some self-reflection and to visit the campus in-person.

"I'm a big proponent of a student getting onto the campus that they're applying to," said Jeff Blahnik of the University of Oklahoma. "The students who stand out during the application process have taken extra steps. Ask yourself what are you looking for. Selectivity is great, but there are many colleges that have great value. Find the right fit."

Brad Booke, of Tulane University in New Orleans, echoed Blahnik's sentiments and encouraged families to consider pre-college programs as a way of learning more about the school in which a student is interested. "These often last one-week during the summer and students can experience the campus to see if it's a good fit."

Adrienne Amador Oddi, of Trinity College in Hartford, CT, reminded students of the importance of making personal connections and develop professional relationships. "Get to know the admissions officer at the school that you want to attend, so that they can advocate for you and connect the dots.

After the panel discussion ended, the college representatives led breakout sessions in the Upper School. The topics included:

Many families said the information they received was invaluable and that they appreciated being able to connect one-on-one with college admissions representatives at Oakridge. 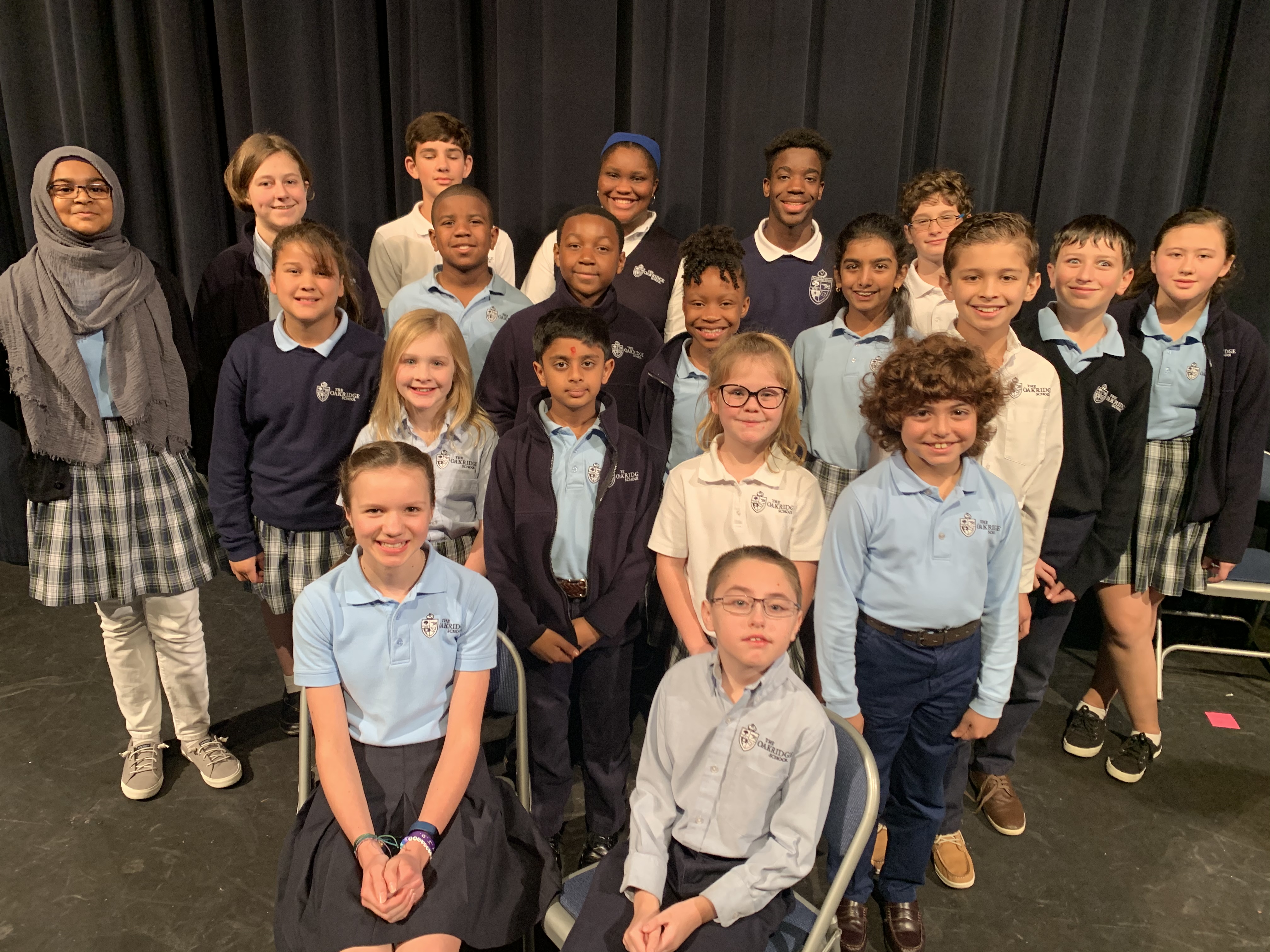 The bee, which included 20 students from grades 4-8, went more than 20 rounds Friday, Jan. 10 in the Fine Arts Performance Hall. Grace now moves on to the regional competition.

Each year, 11 million students compete in spelling bees at the school level, learning important new words along the way. The top spellers advance to the Scripps National Spelling Bee. Bee Week 2020 will take place the week of Memorial Day, May 24 through May 29, at the Gaylord National Resort and Convention Center in National Harbor, Maryland. Visit spellingbee.com/ for more information.

Oakridge's Middle School swimmers competed in Metroplex MS Champs during the third weekend of January, and it was a huge success!

Bryce Key set two new Metroplex championship meet records, and placed 1st in both of his individuals, 100 FR and the 100 IM.

Eli Redding -- shaved off some time in 50 freestyle, placing 16 overall

Congratulations to the Blue Girls' soccer team on your win Tuesday, Jan. 22 against Greenhill. The lone goal was scored by Fiona Bagley, unassisted. The Players of the Game were Fiona and Karrington Barnett.

Congratulations to 7th grader Eshan Signal for his performance Saturday, Feb. 17 at the Springtown Qualifying Math Meet. Eshan placed 1st in calculator, 5th in math, 2nd in number sense, and 6th in science. Eshan advances to the state Texas Math and Science Coaches Association (TMSCA) Math Meet, which will be held in April in San Antonio.