The Oakridge School continues to take steps to respond to the coronavirus pandemic, working to support the health and well-being of our community. Campus is closed and our Distance Learning Plan is in effect until at least Thursday, April 9. Friday, April 10 is a school holiday. The earliest we would return to school would be Monday, April 13.

<Back to News
Oakridge Names Class of 2016 Valedictorian and Salutatorian 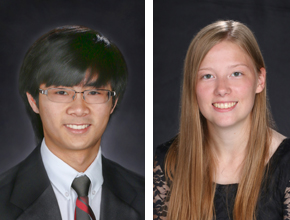 The Oakridge School is proud to announce that the Class of 2016 Valedictorian is Jason Nguyen and Salutatorian is Shelby Warrington.

Valedictorian Jason Nguyen is the quintessential competitor. He loves sports and has been named a three-sport winner for his contributions to our tennis, cross country, and powerlifting teams. Jason is most proud of his accomplishments in powerlifting, which earned him the Most Valuable Player award his senior year. To his classmates, he is also known as the helpful one and the go-to guy for all things technical, which is perfect for a future engineer.

Because of his excellence in academics, Jason was named The Rensselaer Medal recipient in eleventh grade, an award that is given to promising students who have distinguished themselves in mathematics and science. He also earned numerous Most Dedicated and Most Outstanding student awards during his time at Oakridge. Jason was named a National Merit Finalist, a true testament to his diligent efforts throughout Upper School.

Salutatorian Shelby Warrington’s life took a new course when she turned 14: She fell in love with archery. Specializing in compound archery, Shelby made the Compound Junior Dream Team in October 2014. She won first place in the USA National Field Championship, as well as the TSAA State Indoor Championship. In July 2015, Shelby’s team won bronze at the European Youth Cup in Rome. One of Shelby’s proudest accomplishments is earning a spot on the USA Dream Team.

Shelby’s excellence does not stop with archery. She has been a four-year participant with our field hockey team, earning the Most Valuable Defensive Player award for three years, a member of the Chinese Club, and a talented artist. Shelby has performed over 100 hours of community service work through the Junior Optimist Club and her church. Shelby is well respected by her teachers, earning numerous Most Dedicated and Most Outstanding student awards in Chinese, Calculus AB, Biology, Physics, and Art.