Oakridge hosted visiting author and illustrator Jason Chin on Friday, October 7. Mr. Chin’s books include Redwoods, Coral Reefs, Island and Gravity.  Jason talked to Oakridge kindergarten through fourth graders about the research, reading, time, and effort involved in writing a book. He explained that he writes about topics that truly intrigue him, and then he does the research in hopes that others become interested in the subject as well.  He explained that he has done up to 30 complete revisions of his books in order to provide readers with his very best work. 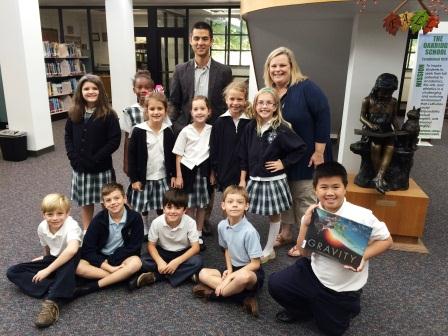 Mr. Chin had a very creative way to get the kids involved with his presentation.  He showed students the first draft of his newest book Gravity, and the progression of the book from second draft to the book’s dummy  (the book’s final prototype) and then the published work.  Next, he chose a student from each class to be a model and then created a large illustration of this student as they would appear without gravity. Students gave Mr. Chin other objects to add to the drawing, and Jason did an amazing job sketching them quickly and accurately.  The students thoroughly enjoyed Mr. Chin’s visit and learned a lot about the writing process and the wonders of science.  "I want kids to read my books and be really excited about the topic and want to know more," Chin said. "I want the books to be something that gets them curious and makes them wonder, and sparks their imaginations."

More information about Jason Chin can be found at http://jasonchin.net/. Mr. Chin’s upcoming book will focus on The Grand Canyon.